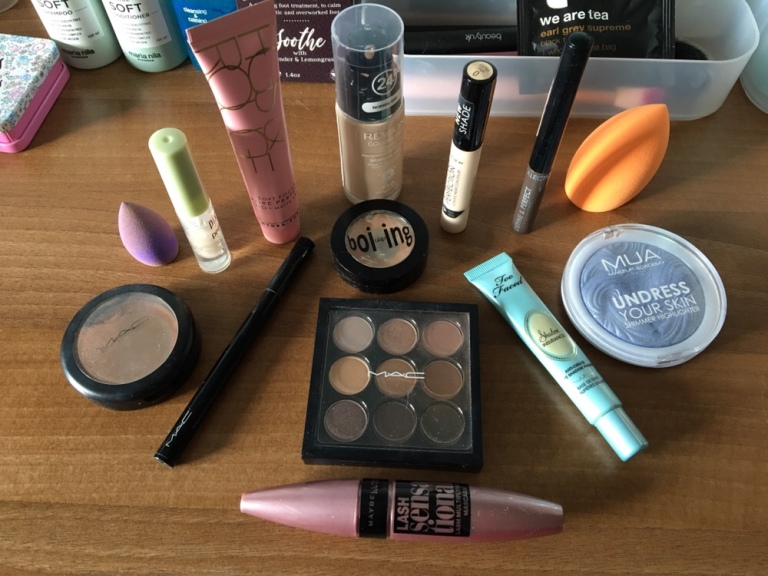 I think most bloggers have done one of these – what do we put on our faces on a daily basis? I thought it would be interesting to do! I know I’ve already done a ‘what’s in my makeup bag?’ post, but this is different, because things have changed since I posted that.

So what does go on my face every day?

Obviously after cleansing and moisturising, the first layer is primer. I used to really like the Clarins Instant Smooth Perfecting Touch, but that gets reserved now for when the tip of my nose has decided to show all the pores all at once. I’ve been using this one by Figs & Rouge on the daily instead.

It came out of a Glossybox and after working out that yes, it was a primer rather than anything else, I’ve really grown to like it. It gives a lovely smooth base to put the rest of my makeup on, and it doesn’t dry me out at all, which some primers have been known to do.

Best of all, it doesn’t pill, which some primers tend to do over my face cream. I’ve heard it said that the Elemis Pro-Collagen Marine Cream that I use on my face is notorious for being a bad base for makeup, but this primer over the top means that there are no problems at all.

Wait what, concealer already? I can hear you thinking, reader, and the answer is yes, concealer already. Thanks to my medical condition and the medication I take, my skin is really red on my cheeks and I haven’t found a colour corrector that actually works. So instead I swipe on a few strokes of Benefit Boi-ing concealer, which does the trick and means that the redness doesn’t show through my foundation. Which it inevitably will, if I don’t put this underneath it.

The hunt, meanwhile, goes on for a colour corrector that isn’t rubbish. I’ve tried most of the ones that claim to reduce redness, and I have yet to find one that works. Any recommendations, readers? 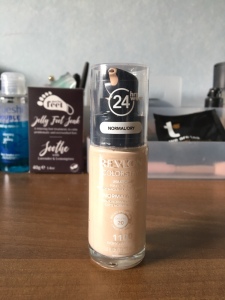 Good old Revlon Colourstay in Ivory 110, one of the few foundations that’s even vaguely a match to my silly pale skin tone. The Normal/Dry formula is really nice – it’s quite thin, which I like. The coverage isn’t full coverage, at least not on me, but it does layer up. It works really well, and I think I actually like it better than my MAC Studio Fix, which it’s replacing for the time being. I think the shade is better than Studio Fix, although I’m seriously leaning towards one of the Nars super-pale foundations being an even better match, but I’m trying to cut down my makeup spending. So while I’m watching my budget, I’m happy with this one. It’s a really, really good foundation, guys. I’m glad I found it.

You can keep your Shape Tape or whatever it’s called – this one by Collection Cosmetics is wonderful (I blogged about it here ) and I have yet to find another one that I like as much. It’s a steal (less than £5) and it covers dark circles really, really well. And believe me, I’ve needed it lately. Long live budget concealers! 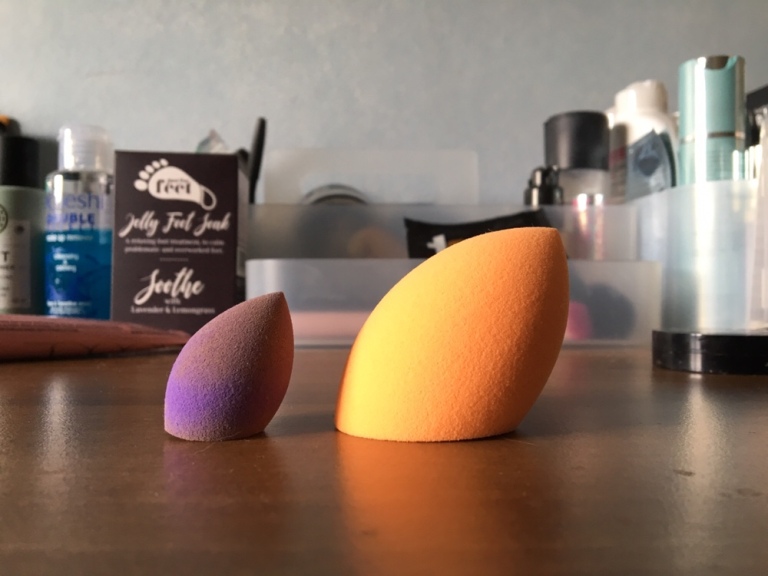 You can’t apply makeup without good tools, and these sponges from Real Techniques are what I use for my face. One big sponge for foundation, and one little teeny one for my under-eye concealer. No brushes needed when these guys are around!

I’m not sharing my blush and highlighter brush or my eyeshadow brushes, because I chop and change those depending on what my hand finds first in the pot or what’s clean. But these sponges are my go-to, and I will always have one of each size around in my makeup routine. 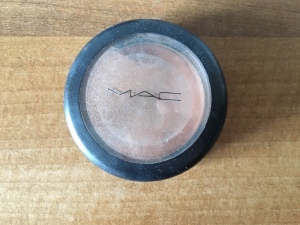 I’ve blogged about this one before in this post and yes, I’m still using it. It really does look the best on me (pink blushes, begone, you have no place in my routine), it blends really nicely and you can cheat and use it as a bronzer too. What more do you need from a product?

Another favourite I’ve blogged about before, I’m still reaching for this one more than any other highlighter I own, and I’ve now got a whole palette of highlighters by Marina & Demme at my disposal. I just really love the shimmer on this one, and that it’s not totally in your face, despite being blue. It is more suited to winter, but I don’t have enough of a tan yet to switch to a different highlighter! 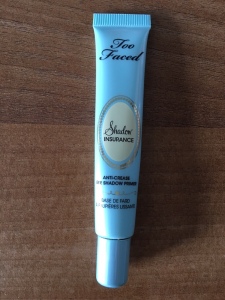 A friend of mine on Facebook recommended this one to me, and I’m eternally glad she did – this really is the best eyeshadow primer I’ve found to date. I know a lot of people use the Urban Decay eyeshadow primer (and I used to until I found this one) or the MAC Paint Pots (never tried those, admittedly) but I rate this one. It doesn’t make me itch, it doesn’t make your eyes feel like they’re caked with primer and it keeps my eyeshadow in place all day. Wonderful product, and I am so annoyed we lost our Too Faced counter in our local department store. Why?! Obviously I can get it online, but I preferred being able to just pop into town and pick it up. 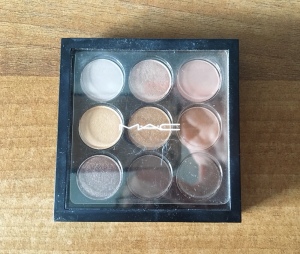 For daily use, my MAC Amber Times Nine is my go-to (I blogged about why I love it here) and I think it will be forever, so MAC, if you see this, don’t ever discontinue it. Sometimes I use a Bobbi Brown cream eyeshadow stick, but these are used far more than that one is. There are so many looks that can be created from this palette, and that’s why I love it!

Because I wear glasses (and no, I can’t wear contact lenses, I’m allergic to whatever they’re made of) I don’t wear false eyelashes unless I’m going out, so for daily use I like a pretty extreme mascara. This one by Maybelline really fits the bill – it is quite thick, and can go clumpy or spidery depending on how much you layer on, but for me, that’s just perfect. The brush is also a slight crescent shape, so you can get right into the base of your lashes. Love it. Forever repurchase!

Another gem from Collection Cosmetics and a wonderful thing that came from a Glossybox, I love this so much. The issue is that I can’t find it in the shops right now, and it’s running out. Crisis! It’s a powder, obviously, and the applicator is really, really fine – think as thin as the nib on a liquid liner. This means you can pretty much draw individual hairs, and I think that’s brilliant. I’ll continue trying to hunt this down in the shops, but I feel I might have to go online to find it again. 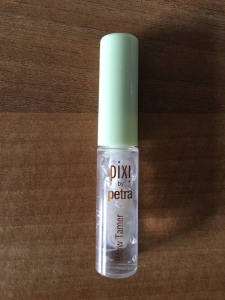 This came out of a Birchbox, and it’s great (plus I know I can get it in Marks and Spencer, so no worries about finding a new one when this runs out!). I like my brows to stay put after I’ve done them, and this does the trick. My brows don’t budge all day. I also very much disagree with the criticism that this makes your brows go ‘crunchy’ – how much are you putting on, complainers? You only need a swipe or two! Don’t apply it so thickly, of course it’s going to go crunchy if you do that. Psh. Common sense!

Not used every day: Eyeliner 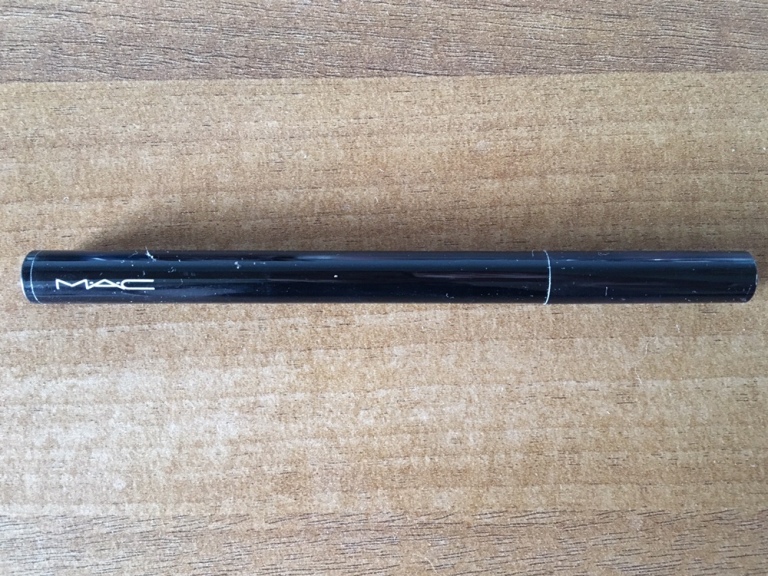 For me, eyeliner is a ‘how late am I?’ and ‘can I be arsed?’ product – if I have enough time, I will use it. If I don’t, I won’t. And my go-to eyeliner is my MAC Brushstroke one (blogged about here) in black. Sometimes I really don’t want to use it, and that’s why it’s not a ‘daily’ thing!

Setting spray… but as I own about four of these and alternate them all, I think they deserve their own post. Coming soon!

So that’s my daily makeup routine. I don’t use as many products as I thought I did! And often I think people don’t realise what they do use until they break it down in a post like this. These posts can be useful!

One thought on “My Daily Makeup Routine”