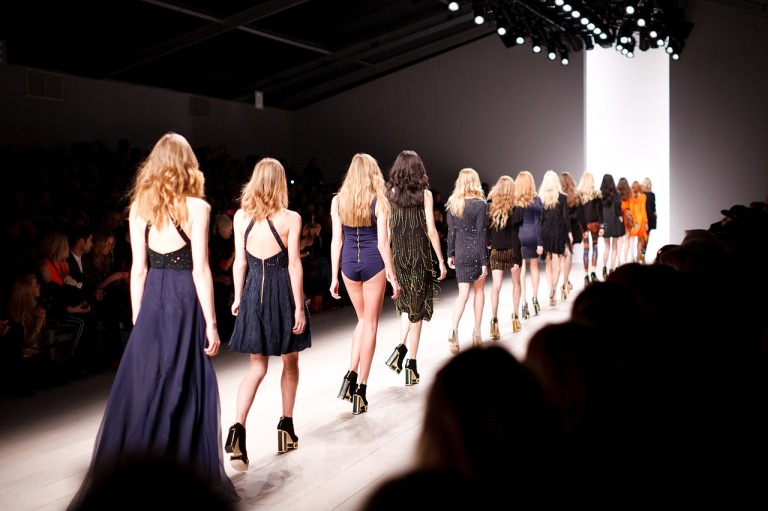 Outwardly, a fashion show seems like the most glamorous event, doesn’t it? The clothes look incredible, the models are flawless and everything is perfect, right?

Yes, for the audience it is.

But for those of us behind the scenes, it’s very, very different.

It was recently Fashion Week in one of the cities over here (not London), and I was helping out behind the scenes for one of the designers who was showing in the opening night show. It was a very valuable experience, but at the same time, it was the very definition of hell.

The week before the show, another stylist and I spent time putting together the outfits for the show and had a little photoshoot – I honestly can’t wait for the images from this, because the clothes are amazing and we had two really great models.

So we sorted all the outfits out, including accessories, and worked out the running order. All was well, so we thought… until the night of the show.

It was pretty chaotic. Zips broke, stuff was missing, we had to Macguyver things (literal paperclips – he would be proud of me) and there was no way that we had time to show all the outfits, so the running order went totally to hell. There were four designers all with rails of clothes crammed into a tiny, tiny space about the size of the average British garage, there was little to no lighting (praise be the iPhone flashlight) and models were stepping on each other, I got kicked (not on purpose but ow, I’ve got bruises) and yet outwardly, on the catwalk, it didn’t reflect the chaos backstage.

After the show, the other stylist and I found the nearest Chinese restaurant and ordered a bunch of food – we were starving, and had literally been surviving on Lucozade and Doritos for the entire day. And while we were waiting, I had the thought that fashion shows are kind of like a duck.

Well, think about your average duck. It looks like it’s gliding quite serenely along on the top of the pond, right? Underneath the water, its little legs are paddling like fury to propel it along. The part of the duck you see is the show going on on the catwalk. The legs paddling furiously is everything going on backstage. The people who sit in the front row at these shows have pretty much zero idea of the chaos that goes on backstage because they only see the serene part of the ‘duck’.

I swore, a couple of years ago after a really bad experience at another show, that I’d never do backstage again. But I thought for this job: ‘this is a new designer, not an established one with an attitude problem, let’s give it a go, it can’t be that bad’.

Oh, yes, it was bad, but for totally different reasons.

And honestly, I’d rather work for the rude internationally famous designer again. At least he was hyper-organised, everything was where it should have been, people knew where they needed to be and ultimately, things ran like clockwork. Not like our tiny corner of chaos.

I guess that’s the difference between a huge thing like London Fashion Week and something smaller like this one though – designers have a dedicated staff to do things like that, rather than just a couple of people helping out.

And speaking of logistics, when it came to the actual show, I was wondering how can you have a catwalk that only allows one model to walk down it at a time? I had assumed that the catwalk would be, well, standard catwalk, where models could be shuffled out quite quickly while the preceding model was still on the catwalk.

Nope. One model at a time, so every show took ages and were running really, really late by the end of the night. And some of the models also couldn’t walk on their shoes, so were taking forever to walk down the catwalk, which was actually seriously pissing me off. If you can’t walk on the shoes you’ve chosen to wear (and these models could choose their shoes, they weren’t provided by the designer) then don’t wear them. The one-by-one and inability to walk meant that every show overran. There’s a flaw somewhere, isn’t there?

Our collection could have been more organised, thinking about it. We should have put the clothes in dress bags after we’d sorted the outfits out rather than just leaving them on a rail, and I think that if I do a show again for this designer, I’ll suggest that. It would make everyone’s life easier, and then on the night, all you need to do is stick a label on the bag saying which model the outfit is for. When the time comes for the show, unzip the bags, hand to model, dress. Like clockwork, in theory.

Honestly, I think if the logistics of a show are good, then it’s a good experience for everyone involved. If the logistics aren’t so good, then it won’t go to plan. And if you are planning a show, think about things like running time and available space. And lighting – maybe put the designers in a better room that isn’t right next to the catwalk and therefore needs to be plunged into darkness so it doesn’t affect the lighting on the actual stage. Dressers and stylists need to be able to see. So do models. Playing ‘hunt the jeans’ in the dark is never fun.

That said, I’ll probably do it again, if only because I (perhaps stupidly) believe that I can improve the backstage experience for people. There’s no reason for things to be chaotic, and my fellow stylist said that I was oddly zen about the whole thing.

I think that’s because I’d passed so far through panic and out the other side that I was literally drifting on the waves of adrenaline.

Or I’d had so much coffee it didn’t matter.

Regardless, I recommend anyone who wants to work in the fashion industry has a go at helping backstage at a show. Come out the other side of that, because believe me, it will make you think hard about whether that is really what you want to do.